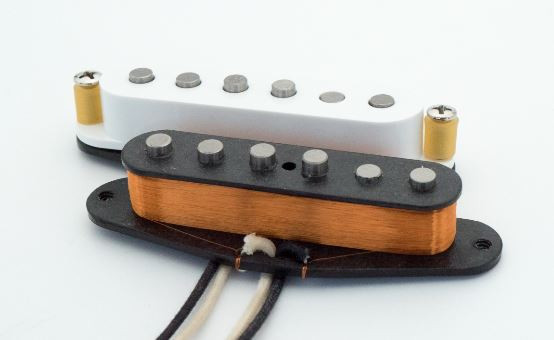 this item will be made on order for you, lead time approximately 30 days

There are many myths and stories about the use of AlNiCo magnets in historic P-90 and humbucker pickups, which have led to misinterpretations here and there. Therefore, I would like to share a few insights that have been developed and collected over the past few years that will hopefully help you to see and better understand the use of these magnets in the historic humbucker and P-90 pickups.

First a few technical data:
The magnets in question are so-called block magnets, as they have been used since 1946 for the Gibson P-90 model and later, since about 1956/1957, for their patent-applied-for humbucker. For both the P-90 and the humbucker Gibson used the same block magnets. This consisted of an aluminum-nickel-cobalt-iron alloy, the so-called AlNiCo, and had the dimensions 2 1/2 "x 1/2" x 1/8". The equivalent in millimeter is 63.5 x 12.7 x 3.175 mm. From mid 1961 onwards, magnets were used which, at 59 mm, were slightly shorter than the older magnets from the 1950s.

The physicist and guitarist Roland Kastl, who lives in Munich, had informed me several years ago that he had carried out extensive research on a large number of dated Gibson magnets from the 1950s and 1960s. The dates resulted from the construction years of the guitars, which were chosen at random. This means that not only the magnets of one type of instrument were examined, but magnets of different guitar models.

The longer block magnets, which Roland Kastl examined, were from P-90 pickups and PAFs and covered the years 1956 to 1960.
I was able to extend this time window by my own measurements, so that the examined magnets cover the period between 1952 and 1960. Magnetic properties as well as measurable effects on the electrical pickup parameters were examined in comparison with reference samples of today's AlNiCo types of the alloys AlNiCo II, III, IV and V.

With the older, long magnets, the result was astonishing in two respects: On the one hand, all original magnets behaved in the same way, on the other hand, there was no correspondence with AlNiCo II, III or V, but a clear similarity to today's AlNiCo IV samples.

The extensive sound tests I carried out with my pickup test guitar also pointed in the same direction as Roland Kastl’s measurements: In the A:B comparisons the old magnets could not be assigned to either an AlNiCo II or an AlNiCo V comparison group. Although it is of course clear to me that sound tests - actually the most important criterion - are always very subjective and momentary and cannot pass as an objective criterion.

All the results of the investigation did not quite fit with the popular belief that Gibson usually used AlNiCo V magnets during the period under investigation, but also other AlNiCo alloys, such as AlNiCo II and III, when AlNiCo V was not available. This statement carries weight, because none other than Seth Lover, who worked as an engineer for Gibson in the 1950s and developed the humbucker, reported in an interview about this alleged purchasing policy of Gibson. (Source: "The Gibson", International Music Publications, Oct. 1996, p. 50)

It was obvious to formulate a thesis, supported by measurements and sound tests but deviating from the common opinion, that Gibson used at least predominantly, if not exclusively an AlNiCo IV alloy for their P-90 and humbucker magnets in the years between 1952 and 1960 and to have this thesis verified by further investigations.

This was followed by various material analysis laboratory tests (permagraph, spark erosion spectroscopy, mass spectroscopy, X-ray fluorescence analysis), which confirmed Roland Kastl's assessment and allowed the exact chemical composition of the magnets to be determined. And indeed, all long magnets from the period under investigation were without exception a variant of AlNiCo IV that is no longer produced today.

This special AlNiCo IV alloy was also initially found in the shorter magnets from the early 1960s. However, AlNiCo II is now also appearing. In the following years (1960s), AlNiCo V was increasingly detected in addition to AlNiCo II.

AlNiCo III, which has come into fashion in recent years for seemingly historical reasons, could not be detected in the older magnets of the 1950s or in the shorter magnets of the 1960s. By the way: AlNiCo III is not a real AlNiCo but an AlNi alloy, because it does not contain any cobalt at all and is not only weaker than the AlNiCo alloys IV and V but also weaker than AlNiCo II.

In cooperation with the development department of a well-known magnet manufacturer the results of the laboratory analyses and the measurements of Roland Kastl resulted - after some optimisation cycles and special heat treatment during magnet production - in the "old" original AlNiCo IV alloy, exactly as it was used by Gibson for their P-90 and humbucker models in the 50s and early 60s.

Postscript:
In addition to the extensive analyses, there are other indications that Gibson used AlNiCo IV magnets predominantly, if not exclusively, in the period from the mid to late 1950s and also in the early 1960s. Tom Holmes tells in an interview with the magazine ToneQuest Report that he was able to look at old Gibson order lists from the 1950s at magnet manufacturer Thomas & Skinner, which prove that Gibson ordered AlNiCo IV block magnets at that time.

Also A. R. Duchossoir writes already in 1981 in his book “Gibson Electrics" about the introduction of the P-90 pickup in 1946:
“This new pick-up had two flat rectangular Alnico (II or IV) type magnets. . . “ This information is particularly interesting because Duchossoir had access to lists of material and was able to conduct many interviews with Gibson employees - and this at a time (late 1970s) when there were still many contemporary witnesses and archive material available.

Seth Lover's statement that Gibson primarily used AlNiCo V magnets, but also other alloys when AlNiCo V was not available, can perhaps be understood and better categorised by looking at the historical context. Seth Lover left Gibson in 1967 and it would be obvious if his statement refers to his last years as a Gibson employee, because the alloys AlNiCo II and V are documented for the mid 1960s - so Seth Lover's statement would make sense.

By the way: We will next investigate the period before 1952, because we think it is possible that the P-90 magnets of the early years (1946 - 1951) first consisted of an AlNiCo II alloy before switching to AlNiCo IV.

Sound characteristics:
A pickup equipped with AlNiCo IV sounds full, has a slightly nasal character and has powerful trebles that are never hard or obtrusive. AlNiCo IV is more defined than AlNiCo V and more dynamic than AlNiCo II.

When the full magnetic potential of AlNiCo V is used, a pickup with this configuration sounds loud, not very nasal and hard in the treble range. Advantage: dynamic in overdrive mode. You can trim the character of the AlNiCo V magnet by specific manipulation in such a way that the sound of the pickup becomes more "acoustic", loses its aggressiveness and goes in the direction of the AlNiCo IV sound characteristics.